UPDATE: THE CAGING AT DEADWATER MANOR AND THE TAKINGS NOW AVAILABLE ON AUDIBLE
All books available in ebook (including kindle unlimited), paperback and hardcover on Amazon 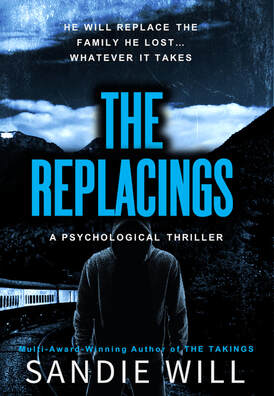 The tragedy of losing your entire family at once runs deep. So deep, you can lose yourself to longing for their return. A longing that can force you to take desperate measures. Adrian just wants a family gathered around a dining room table again. Eating. Laughing. Sharing their activities of the day. And he'll help himself to any child he feels will fit the role as a family replacement.

Wyatt was kidnapped when he was nine. Now sixteen, Wyatt is still in Adrian's clutches, and he's been brainwashed to stay. In the meantime, Adrian has been adding to his family. Wyatt and the others must find their way out or succumb to Adrian's deranged plan.

If you like adult psychological thrillers, you'll like this one, too! It is based near Gainesville, Florida.

In the murky swamps of central Florida, a boy vanished on the way home one night.
No one heard his screams.
No one saw him struggle.
And the police have no answers.
Can one man's visions reveal the truth?

From international award-winning author, Sandie Will, comes a psychological thriller that dives into the depths of a man's struggle with the events of the present that are conjuring up the pain from his past.

At age fifteen, Adrian Webster lost his younger brother in a tragic accident. He tried to mourn. He tried to move on. But all he could do was bury the pain.

Ten years later, his best friend’s son, Wyatt, vanishes while riding his bike through Green Swamp in Central Florida. Adrian's friend has already lost his wife, and he doesn’t want him to suffer the pain of losing a child, making Adrian obsess over finding Wyatt. So obsessed that he’s plagued by visions. Ones that creep into the corners of his eyes. Ones that reveal the truth. And ones that force Adrian to choose between his friendship and unleashing the memories of the past before Wyatt is gone forever and Adrian loses the one thing he loves most in life—his new family.

If you like adult psychological thrillers, you'll like this one, too! It is based in Green Swamp, Polk County, Florida.

​​Signed copies available through The Paperback Exchange Bookstore (see button below).
THE CAGING AT DEADWATER MANOR - UPPER YA PSYCHOLOGICAL THRILLER/HORROR 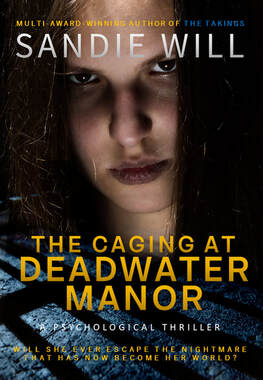 On a cold, January evening, fourteen-year-old Jeannie Kynde is told that her beloved mother drowned in the murky waters along Florida’s Gulf Coast.  Her distraught father turns on Jeannie, no longer the caring father she once knew.

Four years later, Jeannie is finally old enough to escape her father’s clutches, but he has different plans.  He imprisons her at Deadwater Manor, a psychiatric hospital with an unscrupulous past. Will she be locked away forever?

If you like young adult psychological thrillers/horror, you're sure to love this new novel!  It was inspired by true events that occurred at a nearby psychiatric hospital in the Tampa Bay area.  ​

Sandie Will is a participant in the Amazon Services LLC Associates Program, an affiliate advertising program designed to provide a means for sites to earn advertising fees by advertising and linking to Amazon.com.
Powered by